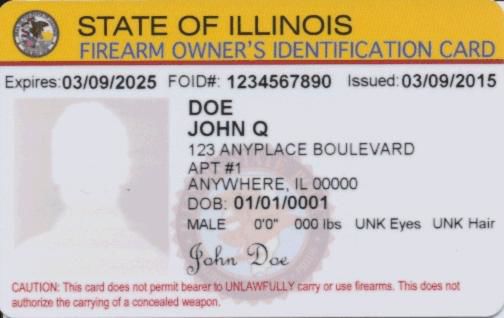 Marron says his office is overwhelmed every week with calls from constituents experiencing long delays for FOID renewals.

“My office receives dozens of constituent calls regarding FOID renewals every month,” Marron said. “There has been a steady increase of approval delays leading to many frustrated citizens unable to speak with a live person when checking on their FOID renewal and approval status. The delays are not due to a lack of funding, but because money that was supposed to be used to provide service to Illinois’ two million FOID cardholders was used for spending in other areas.”

Rep. Charlie Meier says the fund sweeps have led to long delays for gun owners to get their FOID cards renewed.

“The FOID program has been used as a piggy bank to fund other programs,” Meier said. “If the State is going to require the fee, and require the FOID, then we owe it to our citizens to run an efficient and effective program. If we can’t do that, the program should be eliminated.”

Rep. Patrick Windhorst said he is sponsoring a legislative package that would eliminate the FOID altogether (HB 913). Barring its passage, Windhorst says his agenda reduces costs and regulations for law-abiding citizens.

“Illinois is one of only four States that still requires a Firearm Owner’s Identification Card (FOID),” Windhorst said. “Though I believe the FOID card is unconstitutional, that issue will ultimately be decided by the courts. Until the courts decide, there are steps we can take as a legislature to address FOID renewal delays and decrease high costs and burdensome regulations on law-abiding gun owners.”

“We are here to say, either void the unconstitutional FOID card, or stop the fund sweeps and pass our legislative package to ease the burden on law-abiding gun owners, reduce costs, and improve renewal times,” Windhorst said.