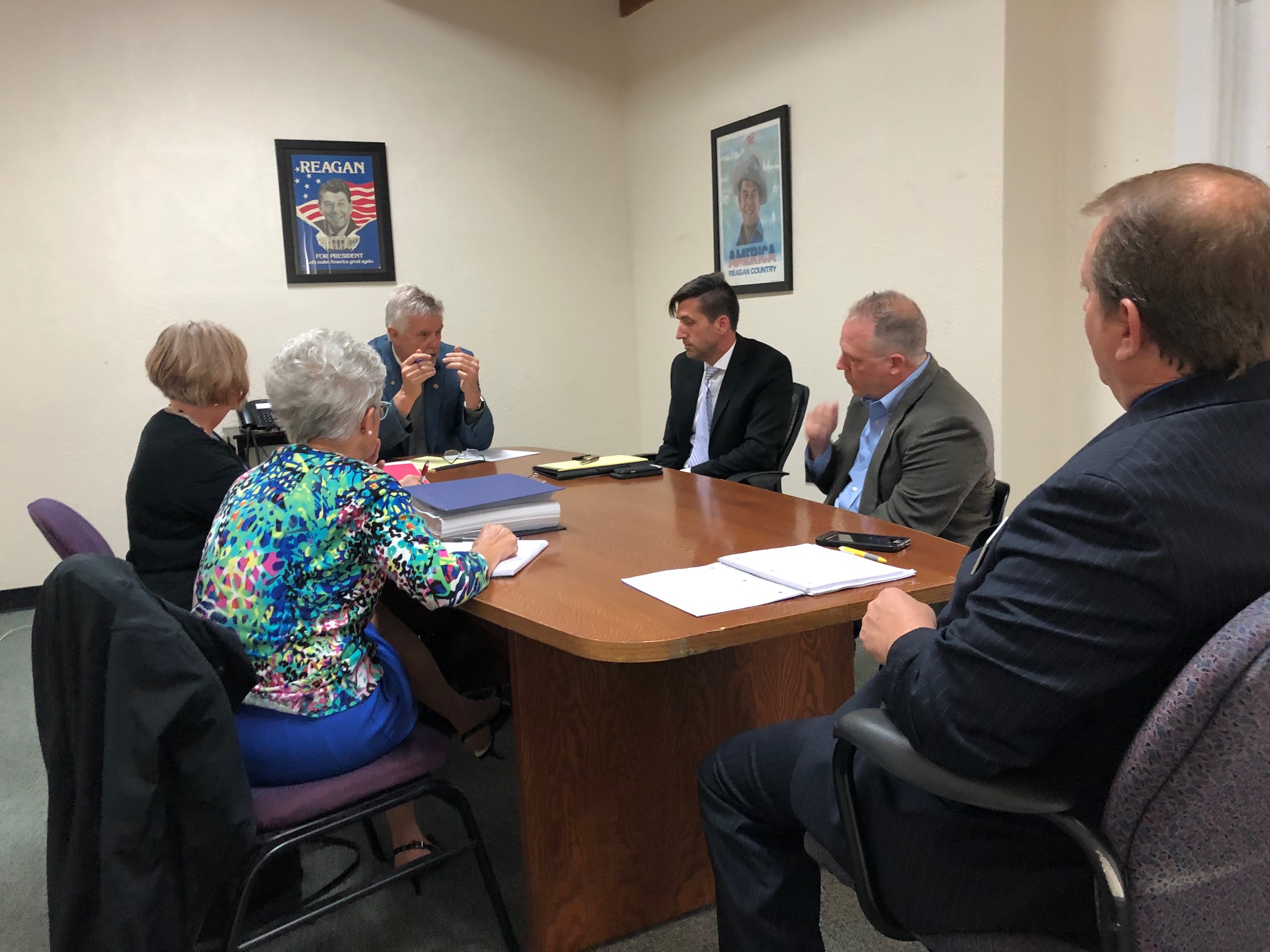 Death of A.J. Freund Spurs Calls for Major Reform
Illinois’ at-risk children are supposed to be looked after by the Illinois Department of Children and Family Services (DCFS). When these children are injured or killed, Illinoisans deserve answers and solutions, and for too long we’ve been given neither. The most recent incident involves the tragic death of A.J. Freund. A.J. lived in Crystal Lake and his body was found wrapped in plastic about a mile from my Woodstock home.

Last Friday, Representative Tom Weber (R-Lake Villa), Senator Craig Wilcox (R-McHenry) and I met with three high-level officials from DCFS in my Woodstock office. We had a preliminary discussion about identifying the gaps in the system that allowed this boy’s repeated warning signs of abuse to fall through the cracks, and talked on a broad level about policy solutions that could prevent future tragedies. The DCFS officials were told in no uncertain terms that we will do whatever is necessary to improve processes and outcomes for youth in crisis in our state. This was the first of what will be many meetings which I intend to result in substantive changes to this agency.

Auditor General Issues Scathing Report on Audit of DCFS
Illinois’ Auditor General issued a scathing report this week that outlined how DCFS consistently failed to follow its own policies for investigating cases of abuse and neglect from 2015-2017. During the audit period, which included 221,341 investigations involving 358,545 children, 102 children with prior DCFS contact ended up dead. In addition to the startling numbers throughout the report, the audit showed that investigators in many cases were slow to make initial contact with possible victims and abusers. The audit also pointed to a failing hotline system where a majority of those leaving a message on the hotline might not have received a timely callback. Despite a federal consent decree that set maximum caseloads for DCFS workers, the auditor found that close to 80% of the investigators had caseloads that exceeded maximum levels.

House Republicans Host Successful Graduated Income Tax Forum in McHenry County
Thank you to everyone who braved the unexpected snow storm on April 27 and attended the graduated income tax town hall meeting I hosted with Representatives Tom Weber (R-Lake Villa), Dan Ugaste (R-Geneva) and Allen Skillicorn (R- East Dundee) in Lake in the Hills. We were joined by tax expert Andrew Nelms of Americans for Prosperity, and after a short PowerPoint, we took questions from a very engaged audience.

The flat income tax guarantee is one of the things that Illinois gets right. Today, if lawmakers want to raise income tax rates, they must raise them on everyone. If they wish to provide relief to lower and middle-income taxpayers, that can be done by providing greater exemptions and credits to those folks without changing the rate structure. By removing the flat rate and implementing a graduated rate structure, lawmakers would be able to impose higher taxes on more and more people by manipulating brackets and rates as they increase state spending. If this initiative makes it to the ballot, I hope Illinoisans think long and hard about whether they can trust legislators to set responsible rates and hold their spending to what is affordable through those rates.

McHenry County’s Patrick Kenneally Testifies to Benefits of Rep Reick’s Bail Reform Act Opt-Out Bill
Last week I was joined in Springfield by State’s Attorney Patrick Kenneally for a subject matter hearing on legislation that would allow some Illinois counties to opt-out of the provisions of Illinois’ new Bail Reform Act.The House of Representatives’ Judiciary Criminal Committee held the hearing to gather information about the bill, but because the hearing was subject-matter only, no vote was taken to advance or reject the legislation.For larger initiatives such as this, a subject matter hearing is often the first step of the political process.

I filed HB 221 earlier this year, but was told the legislation would not move during the current session. The bill would allow any county with a population of less than 3,000,000 to exempt itself from the provisions of the Bail Reform Act if the county board adopts a resolution for that purpose.

The author of the Bail Reform Act was well-intentioned, but as this new law was implemented it became very clear that there is no “one-size-fits-all” solution to pre-trial justice reform. Provisions that are working well in Cook County are actually having a negative effect in McHenry County and other suburban and downstate areas.

Mr. Kenneally spoke about shortcomings in the new Act that have had unintended consequences in most areas outside of Cook County. He told committee members the provisions of the Bail Reform Act make it increasingly more difficult for his office to fight the opioid epidemic because it puts opioid abusers back onto the streets after they have detoxed in jail but before they have accessed services to address the addiction.

Senate Democrats Advance Graduated Income Tax Package
Illinois Senate Democrats have passed a graduated tax package out of the Senate that would increase taxes by more than $3.5 billion per year. The Senate tax package includes four pieces of legislation. The four-piece package is tied together, meaning all of the bills must pass or none of them takes effect. The bills include:

SJRCA 1, which was approved along party lines with all 19 Senate Republicans voting “no,” would remove the flat income tax requirement from the Illinois Constitution and provide that the General Assembly would set income tax rates. As I discussed above, our flat tax structure is an important taxpayer protection, which, if removed, would provide legislators with a much easier method by which they could raise taxes in the future. The Constitutional Amendment would not enshrine actual rates, thus eliminating any protections from tax hikes beyond year one.

Senate Bill 687 (approved 36-22) contains the new graduated income tax rates/brackets. In some cases, the rates are even higher than what was proposed by Governor Pritzker just two months ago. As approved, the Senate proposal raises the top income tax rate to 7.99% from 7.95% in Governor Pritzker’s proposal and kicks in for individual filers with income over $750,000 and joint filers with income over $1 million. The highest 7.99% tax rate would apply to all income. You can look at this as merely a “teaser rate”, because given the current appetite for spending in Springfield, it won’t be enough. The Governor has said that the measure will add $3.25 billion to revenue in its first year, but based upon the bills we’ve passed just this term, that money’s already been spent. The rates that we’re going to be asked to vote on as part of this package of bills will have to be raised, by a large amount and soon.

Senate Bill 689 (approved 33-24) would repeal the Illinois estate tax. This repeal is contingent upon passage of the graduated tax amendment. According to COGFA’s FY20 estimate, repealing the estate tax would reduce state revenue by approximately $300 million. This is merely a sop to get Republican support.

Senate Bill 690 (approved 36-18) would provide property tax relief beginning in 2021, based upon the condition that the State fully funds K-12 education as called for in the evidence-based funding model passed in the last General Assembly. This would require $350 million annually under the new funding formula and approximately $300 million for mandated categorical payments. If these education funding requirements are met, property tax rates for school districts would be frozen for the coming year and every year thereafter in which the State meets the full funding requirement. This freeze doesn’t address the fact that we still have the highest property taxes in the nation, nor does it recognize that the current funding formula doesn’t address ongoing increases in local school spending, such as labor contracts.

Pension Crisis is Key Reason Why Graduated Income Tax is Not the Solution
Illinois’ biggest problem is its debt. The backlog of bills is huge, but it pales in comparison to our pension debt. Today about 25% of the state’s general revenue is earmarked for pensions, and that number increases sharply in the coming years. Simply put, there’s no way that any change to the income tax structure will accommodate increasing pension obligations and the state’s primary responsibility to fund essential state programs and services for vulnerable populations.

The Governor is on record as saying he’ll allocate $200 million per year of the tax increase toward the debt, but that amount doesn’t come close to addressing the true costs of current pensions. It doesn’t even cover the annual increases in pension contributions called for under current law.

Do we need tax reform? Absolutely. But this isn’t the way to do it. We need a global review of our entire tax structure with an eye toward creating a tax system that moves in the direction of our economy, which requires us to look at not only income taxes, but all sources of revenue: sales taxes, motor fuel taxes, user fees and property taxes. We also need to change the mindset where most legislators automatically think that taxes is the only way to increase revenue. As I’ve repeatedly said, our job is to create conditions where businesses can add jobs and grow the economy. By doing that, we can increase revenue in the only way that is truly sustainable.

Measure to More than Double Motor Fuel Tax Advances out of House Committee
On Thursday, the House Revenue & Finance Committee advanced a measure that would pump $2.44 billion into a capital plan through large increases to the motor fuel tax and to vehicle registration costs and fees. An identical bill was also filed in the Senate.

I am aware of the importance of maintaining our roads, bridges and other infrastructure and recognize that it has been more than a decade since we’ve had a capital bill to fund these key projects. Here locally there is no project more important than safety and capacity improvements to Route 47.

I serve on the Revenue & Finance Committee and several members expressed concerns over the plan to more than double the motor fuel tax and the other registration and fee increases. While the bill cleared the committee in a 9-6 vote, discussions are ongoing and additional amendments are expected if/when the bill reaches the House floor. In its current form I could not support the bill so I voted against advancing it out of committee.

Reick Co-Sponsors Legislation to Require Supermajority Vote to Raise Income Taxes
Earlier this week I joined about 30 of my House Republican colleagues in sponsoring HJRCA 34, which would mandate 2/3 approval from lawmakers to raise income taxes on Illinoisans. The legislation would become especially critical if the effort to eliminate Illinois’ flat income tax is replaced by a graduated tax system.

HJRCA 34 would provide an important layer of protection for taxpayers because it would make it harder for legislators to raise the income tax. While a supermajority vote is needed to change the Constitution for a graduated tax structure, once it is in place only a simply majority vote would be required to raise the rates.